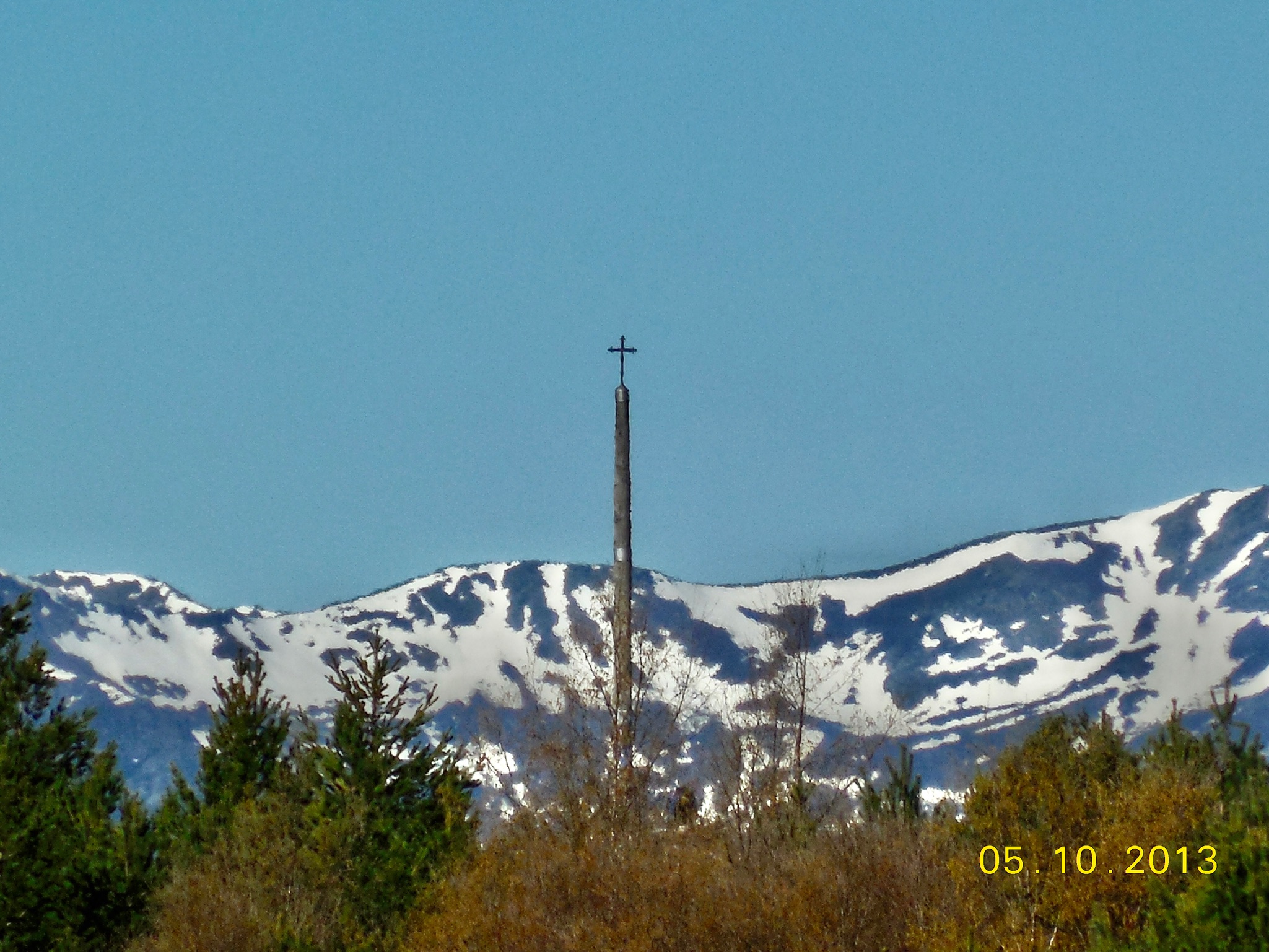 To some walking the Camino the Cruz de Ferro (“Iron Cross”) is at best a curiosity and at worst an eyesore that spoils an otherwise pristine high mountain vista. It is a house-sized pile of stones sprouting an overlarge telephone pole that is capped with a small iron cross.

To others it is a mystical place, a place for silent spiritual contemplation, with each stone marking the passage of one of countless pilgrims who over the centuries have passed this highest point of the Camino on their way to Santiago. Each stone is a burden cast aside and a hope taken up that one’s life may someday be measured favorably in the Final Judgment. To all it is a magnet, an irresistible draw for those walking “The Way”.

In making our preparations to walk the Camino we had not neglected to prepare for this day. Christine and I had each carefully selected stones to carry as metaphors of our life burdens. Mine was small and of red granite. I had “harvested” it over 25 years earlier in rural northwest Missouri, one of thousands that we and our children had cleared by hand from acreage upon which we made a home and raised our children through their teenage years. Although we had sold the home and land 15 years before setting out on the Camino, I had taken a selection of those red granite rocks in 1998 to our next home in suburban Kansas City and then again years later to our current house in the central city where they remain vine covered and almost forgotten beneath a large pine tree.

Why have those stones followed me for the last 34 years? Perhaps for the same reason that a small one from their number accompanied me to Spain and now resides among countless others, 4,940 feet high upon a mountain at the foot of a curious telephone pole that is capped with an undersized iron crucifix.

On the morning of May 10th we set out from Rabanal. I was still filled with wonder at my time spent the prior evening with an aged German monk inside the town’s ancient cave-like chapel (see Part 33).

The Cruz de Ferro was 8km distant, but at a climb of nearly 1,200 feet Christine elected to take a taxi to the cross and wait for my arrival. In turn I walked in the company of Dutch pilgrim, Jacobien Ubbink. 5 years later “Jackie” would graciously host us as guests in her home and show us the sights of Amsterdam as we wound our way through Europe.

It was a beautiful day. The sky reflected turquoise and just a hint of a chill showed as wisps of fog on our breath.

As we walked, Jackie and I each shared parts of our personal stories. She had recently lost her father and was still working through that grief. She reflected that her father often encouraged her to periodically stop and turn to see where she had been.

Where one has been often looks different when viewed from where one is. I remarked at what a wonderful lesson those words provided, not just for a physical journey but for one’s journey through life. Her father was a wise man.

Along the way we paused at fountains to drink and fill our bottles.

The mountains and meadows became more prominent as we climbed the trail through the pass of Irago and arrived in the tiny village of Foncebadon.

Local tradition holds that during the Middle Ages the town was granted a tax exemption in return for placing 800 stakes to mark the path of the Camino as an aid to Peregrinos. Over the years the once thriving town fell to ruin and was virtually abandoned by the 1990’s. In recent years the resurgence of interest in the Camino has brought to Foncebadon a small renaissance in the form of building renovations and the establishment of a store, Albergues, and a café that have become popular on the route.

Our climb continued along a track that passed various nameless (to us) ruins.

In the distance that “curious telephone pole” came into view and beckoned to us as it had for millions of others over the centuries.

At the Cruz de Ferro we were greeted by Christine. She had delayed her departure from Rabanal so as not to spend an excess of time waiting for us at the top. She had been there for about an hour and embraced the opportunity to watch the arrivals and departures of scores of pilgrims. She reported seeing a spectrum of reactions. A group of bicyclists took turns riding to the top of the stone pile, touching wheels to the pole, while others of the group took pictures. A van arrived, disgorging a group of people who each hurriedly cast stones on the pile only to board the van with virtually no pause and then drive off. Poignant was a pilgrim who asked her to take his picture at the cross. With great care he slowly ascended the stone pile and reverently left a pair of crutches at the base of the cross. Kissing the crutches and making the Sign of the Cross, he descended with the same slow care with which he had climbed.

We found that the crutches were among other non-stone artifacts left by passing pilgrims. There were religious items, prayer flags, funeral cards, pictures of loved ones,… and sadly, a baby’s silver spoon.

Christine and Jackie shared a bench at the side of a small chapel near the cross.

They talked of the pain felt over the recent loss of parents, Christine’s mother, Doris Nichols, having died 2 years earlier. Thought of their tearful embrace still stirs deep emotion within me and contemplation of the passing of my father (2009), mother (2020), and father-in-law (2020).

One aside: The iron cross atop the pole is not the original. It is a reproduction that replaced the original cross which may still be seen in Gaudi’s Palacio Episcopal in Astorga.

The three of us continued on together to El Acebo. At times the path changed from mountain trail to lightly trafficked lane. Christine remarked that the song, “I’m On the Top of the World Looking Down On Creation,” kept playing in her head.

We passed the unusual “eco-albergue” at Manjarin which was bedecked with all varieties of flags and banners.

The 35 pilgrims who choose to make the night here are afforded mattresses and the simplest of accommodations. Water is solar heated, and heat is provided by an open fire. A simple communal dinner is served. I would have enjoyed the experience, perhaps on another Camino.

We arrived in El Acebo where we enjoyed cold beer on a delightful sunlit patio.

Christine and I decided to forgo a night in an albergue in favor of the charming accommodations of La Casa Del Peregrino, a simple adjoining hotel.

The evening concluded with a sunset stroll through town, a few pictures, and thoughtful consideration that my Camino had become something far greater than a mere checkmark on a bucket list.

PS. It is traditional to say a prayer at the Cruz de Ferro. Along with my stone I carried my prayer, typed on a small piece of paper. After I recited it I returned it to my pack. It remains among my possessions, a memento of a day briefly spent closer to Heaven.