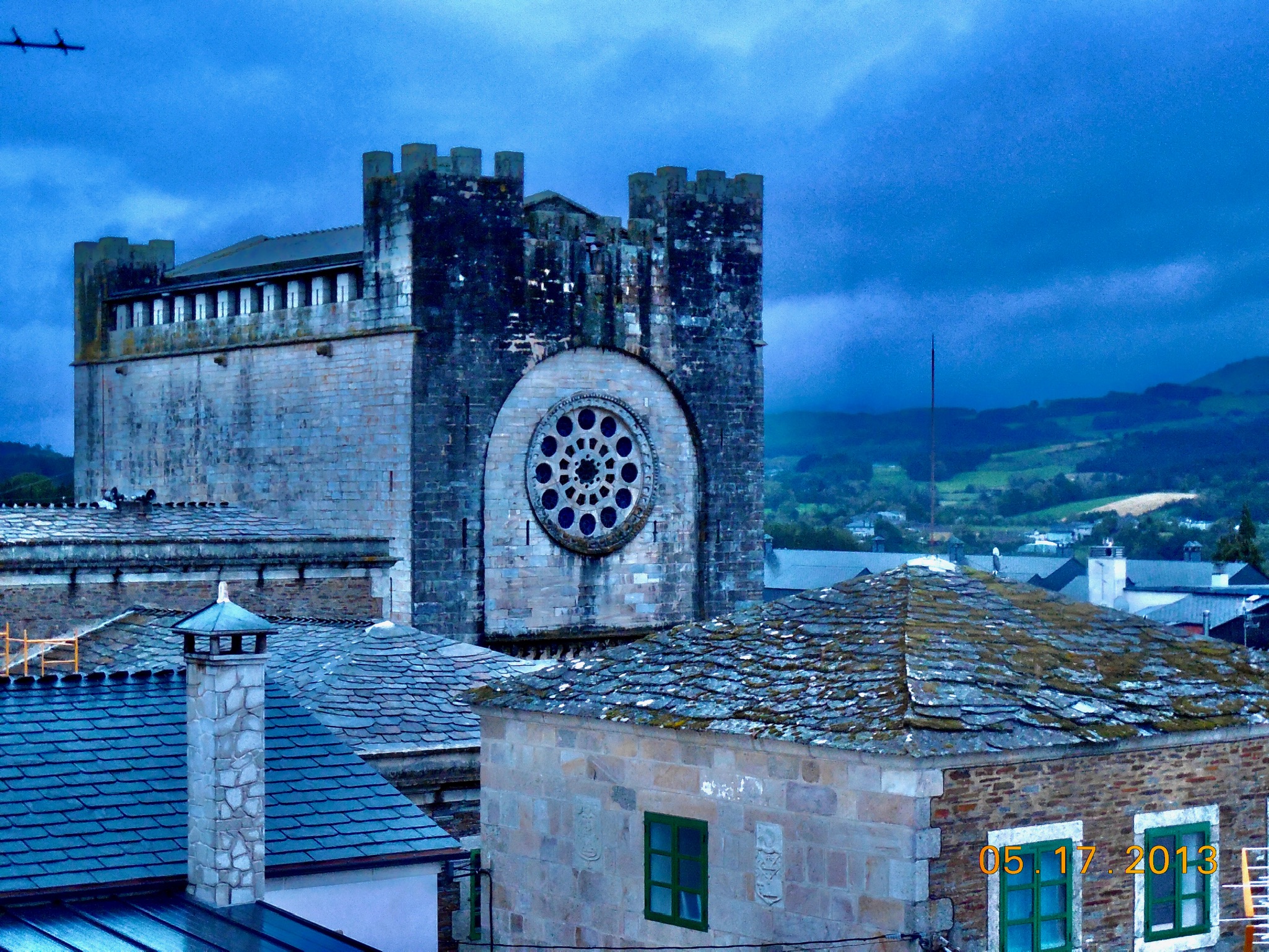 The rain of May 16th continued into the 17th, thankfully with less energy. 18km separated us from our destination for the day, Portomarin. This was our 35th day on the Camino. We had whittled down 820km to just over 100km, one day and one step at a time. Our arrival day in Santiago looked to be May 22nd, only 5 more days.

First about our goal for the day, Portomarin:

With fewer than 2,000 inhabitants the town is certainly not a tourist destination. Yet, it has held a prominent place with pilgrims as an important waypoint since the inception of the Camino. It was founded in ancient times at the site of a 2nd Century Roman bridge that crossed the 340 km long Mino River. The “old” Portomarin featured the imposing 12th Century Romanesque church of San Nicolas, also called the church of San Xoan de Portomarin due to its association with the Knights of St. John. There were also the 10th Century Capela de San Pedro (Chapel of St. Peter), and the 52 “Spanish Steps” that were once part of the original Roman bridge that crossed the river to the village. These images are from the 1950’s.

In the 1950’s  Spain’s Francisco Franco sought to build a hydro-electric generating facility by erecting a dam 40km downstream from Portomarin. In 1963 the Belesar Reservoir project was established, threatening to submerge the entire community of Portomarin beneath the reservoir’s rising waters.

The townspeople responded by moving the two churches, the “Spanish Steps”, the main elements of the town square, and other selected historical buildings from their original locations to the bluffs overlooking the river valley. Stone by stone these buildings were disassembled, the stones numbered and transported up the hill where they were painstakingly re-assembled as part of the “new” Portomarin.

The waters of the reservoir are subject to significant changes of depth due to drought and drawdown of the impoundment for the generation of electricity. At times the level is so low as to reveal the old bridge and remnants of  the “old town”, a virtual Atlantis that can be explored with wonder.

Back to our day on the Camino:

There was some regret that we had to leave the very pleasant confines of Casa Barbadelo. More an economy resort than albergue, we enjoyed a leisurely breakfast and a departure that was later than allowed by most albergues. In spite of the light rain, our spirits were high.

Before leaving the tiny village we stopped to stroll through the 12th Century Romanesque church of Santiago de Barbadelo and its adjoining cemetery. This national historical monument was once the site of two monasteries that date to the 10th Century. Only traces of the monasteries remain.

While some humans may find the dampness of Galicia annoying, the flora and fauna flourish in the frequent rains. The change of climate is the result of the prevailing winds that have crossed the Atlantic Ocean. These breezes have absorbed moisture for thousands of miles only to release their damp burden in the lush green mountains of Galicia.

About an hour out of Barbadelo we came upon an interesting fountain surrounded by a wrought iron fence which was decorated with sculptures of scallop shells.

What drew my eye was an odd cartoonish creation that seemed to be a caricature of a Peregrino. I had seen this same “mascot” on other occasions. This one discharged water from its “mouth” into the large basin, being the worse for wear as algae beneath the spout gave the impression of green vomit.

This Camino ”mascot”, known affectionately by some and derisively by others as “Pelegrin” was created in 1993 as a modern commercial promotion of the Camino during that Holy Year. Designer Luis Carballo sought to use simple cubist shapes to make an image that he hoped would become long associated with the Pilgrimage.

This was much in keeping with similar cartoon “mascots” of the time, most notably “Curro of Expo 92 in Seville,

and Cobi, mascot of the 1992 Barcelona Olympics.

Pelegrin’s image could be found on t-shirts, caps, and a wide assortment of Camino souvenirs. Trying to further capitalize on this short-lived success, other “mascots” followed. There was Alberte Permuy’s “Xubi”, an odd multi-colored integration of a walking staff and gourd, conventional symbols of St. James and the Camino.

“Pingrino” was created in 2010 by Javier Iglesias as a cute penguin outfitted in Peregrino regalia.

Of course, how could Camino promoters possibly fail to bring COVID-19 into a memorable design.

I am left to wonder why the Camino, already rich with well-known images of Santiago, yellow arrows, and scallop shells, just to name a few, needed a cartoon mascot. Creations based upon other poplar images, not to mention human ones, already abound.

On our way to Portomarin we crossed the “magic” 100km countdown to Santiago. This would have been an excellent place for a celebration, but after a picture we soldiered on.

Beginning at Sarria, the path of the Camino acquired a significant influx of new Peregrinos. Many of these pilgrims new to the journey were easy to identify. Among the “tells” were items not often seen over the preceding 700 kilometers: blue jeans, tennis shoes, makeup, and clean clothes, just to name a few.

Tour buses also became prominent. On occasion we would observe these buses stop in a town, disgorge a score of passengers who then would charge into churches, restaurants, cafés, or government buildings in search of a stamp for their credencial. Once obtained they would stampede back to the bus which then headed down the road for their next scavenger hunt destination and “stamp”. As the black diesel smoke cleared I was left to wonder if any of those “busagrinos” would seek a Compostela in Santiago. Not my problem, not my concern.

As we neared Portomarin the Belesar Reservoir first came into view, followed by the town on the opposite side from us.

The reservoir was near capacity. Images seen of the bridge at low water in the years that followed were eye-opening.

Notice the old bridge at the base of the new one.

The long walk on the bridge above the water led to the “Spanish Steps”, a tough climb at the end of a long day.

We walked through the center of town, taking in the restored business district and fortress like church of San Nicholas. The church was not open. The interior image is courtesy of the internet.

Our accommodations for the night were at El Caminante Pension, a private Albergue that featured “Pelegrin” on its marque.

It had an excellent restaurant and bar. It was our good fortune to be joined at table by other Camino friends for a dinner selected from the special Pilgrim’s Menu.

Typically, “pilgrim’s menus” provided a salad course, main course with protein and vegetable, and a dessert for around 10€ per person. Also included for the price was a choice of either bottled water or wine. Over the weeks that we walked I can’t recall anyone opting for water, nor do I recall the flow of wine ever ending before it was time to leave the table.

Best of all, our room provided exceptional evening and nighttime views of the village.

With only 92km separating us from Santiago de Compostela, a shadow of sadness began to cast upon my thoughts. Why must all good things come to an end?

Peace Everyone, and of course Buen Camino! Pete