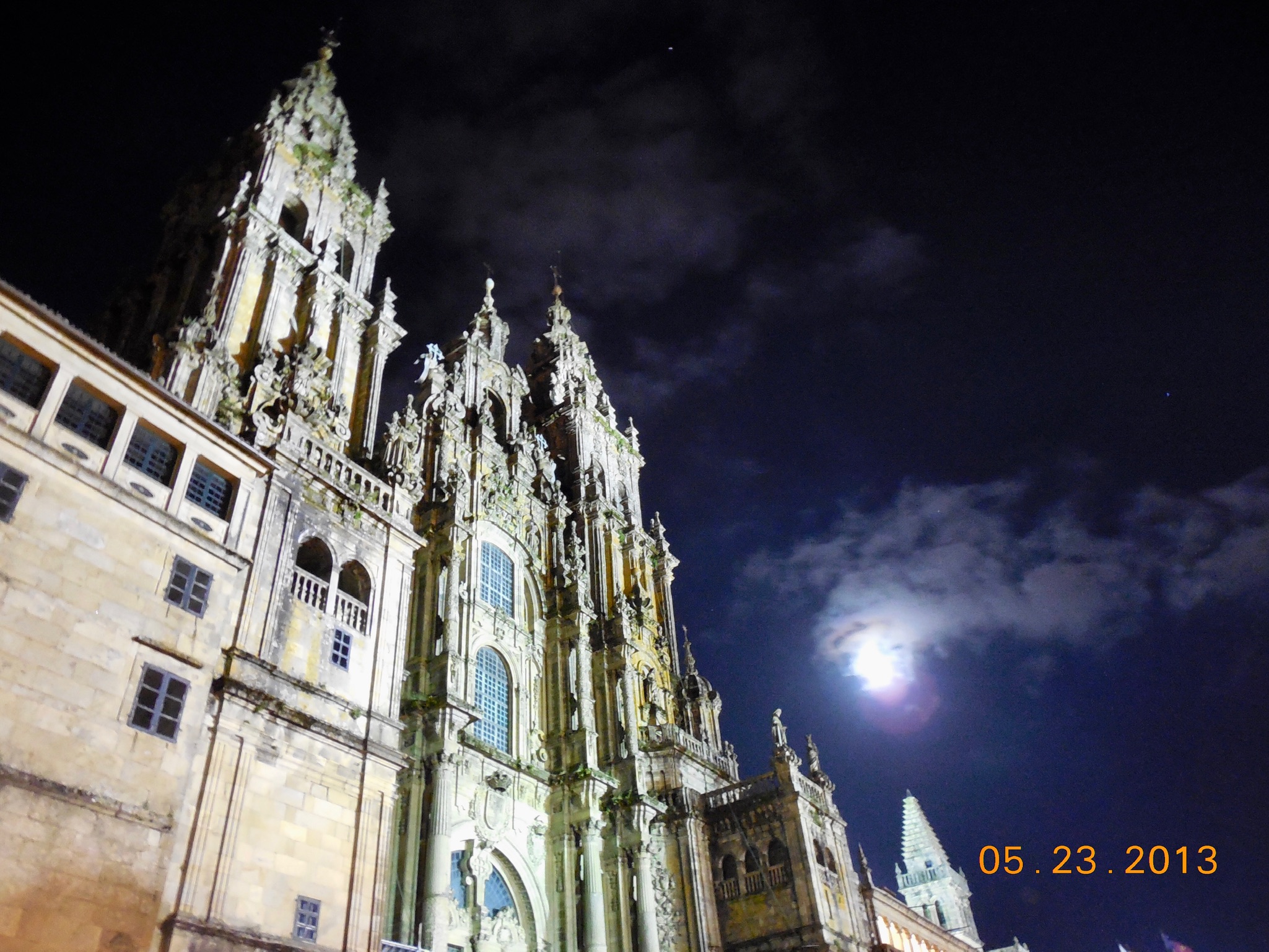 We slept well, and later than usual for the Camino. Showered, dressed, and no arranging packs for the next destination. Were we still pilgrims? That question had yet to enter my thoughts. Breakfast at Hospederia San Martin was a cafeteria affair shared with those lodged on the lower and less “Spartan” floors.

The options were plentiful and well prepared.

Much like our second days in Burgos and Leon, this would be a day to take in the environs of the old city. However, highest on our list was to visit the Cathedral and attend the noon “Pilgrim Mass”.

We arrived early enough to score seats at the front of the left transept, near the main altar. To our surprise and delight, our Camino friend Brent had already scored a prime seat in one of the front pews. We joined Brent.

Brent and I had first met walking across the Pyrenees Mountains to Roncesvalles. He checked in on Christine when she was ailing in Burgos. We again crossed paths in Leon where he and his walking companion, Mike, had honored me by buying and wearing berets, adopting my practice of donning them at the end of the day’s hike.

It was appropriate and unexpected that the three of us would share the pageantry of the noon Mass.

For many of us, the big question was, “Will they light and swing the Botafumeiro?”

Christine and I have attended Mass three times at the Santiago Cathedral. It has been our good fortune to see the grand censer swing on each occasion. It is typically reserved for special occasions, however a practice has developed where for a fee a congregant may arrange in advance for this sight at a particular Mass. I believe that the fee in 2013 was the equivalent of about $300.00.

A nun took the podium and gave instructions to the assembly on proper conduct, specifically when pictures were allowed and forbidden. Essentially, once Mass began cameras were only permitted during the proceedings involving the Botafumeiro.

As stated in the preceding post: This massive silver “thurible” (censer) is thought to be the largest of its kind in the world. The current censer was crafted in 1851 by a goldsmith from brass alloy and plated with silver, it stands over 5 feet tall and weighs 124 pounds when filled with just under 2 pounds of charcoal and incense. (Measurements are from a unique 1983 study of the Botafumeiro that was authorized by the Cathedral.) A mass of incense is then poured atop the lit charcoal. It is suspended by a rope and pulley mechanism located high above.

The current structure dates to 1604. The Botafumeiro is next hoisted upward by 8 robed attendants who set the massive smoking censer into a swinging motion. The arc soon travels high overhead, from near the top of one transept to the other, achieving a speed of over 50 miles per hour. Over the centuries there have been a few accidents where the Botafumeiro separated from the rope in the course of its arc. In 1499 the rope broke, and the censer rocketed out, crashing into one of the side doors of the Cathedral. Reportedly, no one was injured.

The ceremony was a highlight for us, as was the reading of the numbers of pilgrims, listed by country, that had registered at the Pilgrim Office the preceding day. Although individual names were not given, we “heard” recognition of our accomplishment as the tally of those from the United States was recited. At the end of this post I will include a link to a YouTube video of the swinging of the Botafumeiro.

After Mass we occupied ourselves with wandering through the Cathedral and marveling at its beauty, art and history.

We passed before the Porta Santa (Holy Door), which is opened only during Jubilee years, years in which the feast day of St. James falls on a Sunday.

An effigy of Maestro Mateo is located at the foot of the central post of the Portico da Gloria.

Unlike the Apostle high above him, he faces into the church holding a sign on which was once visible the word “Architectus”.

Tradition held that if one gently “knocked heads” with the Architect, some of his genius would rub off. As with the other side of the column, this too was cordoned off to prevent further damage to Mateo’s granite skull.

We climbed the stairs into the chamber above and behind the main altar to embrace “The Saint”.

Beneath the main altar we visited the crypt which is reputed to be the repository of the earthly remains of St. James. The stonework of the tomb is comprised of part of the foundation of the original 9th Century church. Santiago’s silver reliquary, seen here, was created in the 19th Century.

Our explorations extended to the area and streets outside the Cathedral.

We continued to encounter familiar faces, including a couple, Claudia (Italy) and Sven (Eastern Europe), seated off the south façade of the Cathedral.

Store windows were filled with all things Camino, but apparently eight years ago I found only the octopi in a seafood shop worthy of a picture.

Tapas, wine, and beer made for an excellent lunch, with more sights to follow.

By pre-arrangement we joined Brent, Kris, and two of Brent’s Camino friends for an early dinner.

Yosmar Martinez (America), who is an administrator for the American Pilgrims on the Camino (APOC) online forum,

Una and I engaged in a discussion during which I likened my time on the Camino to being in “Never Land” (from J. M. Barrie’s “Peter Pan”), where an adult may return to the spirit of youth and childlike wonder. “Tir na nÓg” she replied, “It’s Irish for “Land of Eternal Youth”, she continued. I would later recall those words for a reflection written a week later as our jet crossed the Atlantic bound for home.

We could not let go of Santiago, though that evening we confirmed our May 28th flight reservations on Ryanair, Santiago to Barcelona. Wandering the streets after dark we happened upon two more dear German Camino friends who we thought we would never see again.

Ramona and Kalina appeared in our photos at Orisson Refuge on day one of our Camino. We would later see them in Villamayor de Monjardin, and Torres del Rio. Mid-Camino, Kalina fell ill with pneumonia and spent a few days in hospital. We were relieved to see how well she looked. The four of us decided a late evening pizza and wine celebration were in order.

With a final “Buen Camino” we embraced and went our separate ways. Near midnight Christine and I crossed the square in front of the Santiago Cathedral. It loomed above us, echoing lives drawn to it over the centuries, lives changed one step at a time.

PS. Our return flight to Barcelona was scheduled to depart in 5 days. We had time to visit Muxia and Finisterre on the Atlantic Coast, but not on foot. To be continued…

This is the link to the video of the Botafumeiro,