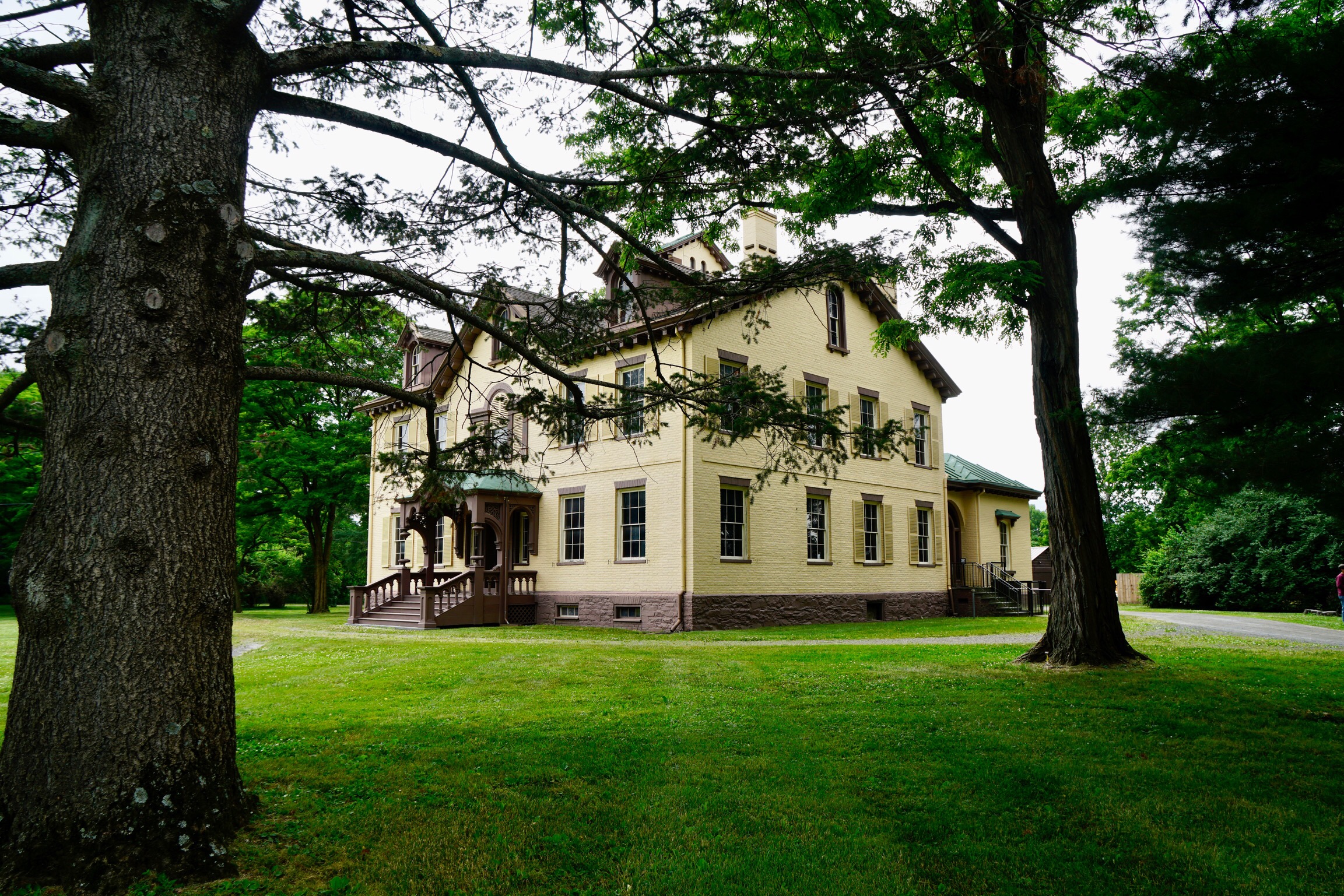 June 25, 2022. We are camped for 2 nights in Vermont’s DAR (Daughters of the American Revolution) State Park, on the east shore of Lake Champlain, near Fort Ticonderoga, a center point of conflict during the French and Indian War.

Lake Champlain extends 107 miles from Ticonderoga to Quebec. It was the site of major naval engagements between America and British vessels during the American Revolution and the War of 1812.

After 2 days of rainy overcast we are finally graced by blue skies and warm drying temperatures. Our campsites have not had electric service so we have been relying on battery to power our trailer systems. Today our solar panels are drinking up the sun-generated electricity and restoring our power reserves.

Martin Van Buren (1782-1862), was an American lawyer, 8th President of the United States (1837-1841), America’s 8th Vice President (serving under Andrew Jackson), the 10th US Secretary of State, 9th Governor of New York, US Senator from New York, and he is considered the founder of the Democratic Party and creator of America’s two party system.

Only 5 foot 6 inches tall, he rose in prominence to become a giant and elder statesman in American politics. He was the first US President not to have British family roots, and the only US President who’s first language was not English. He grew up speaking Dutch, acquiring English in school as a second language.

Born in the small village of Kinderhook, New York, his early years were spent living in the family’s inn/tavern where he was exposed to a continuous flow of dignitaries traveling “the Old Post Road” between Albany and New York City. His ambition and political adroitness perhaps had their roots in the many conversations of state, national, and international matters that he was exposed to. At the age of 14 he began his legal career as an apprentice to a local attorney.

His life was bookended by the birth of the Republic and its near death in the American Civil War. Although an eloquent man of great intellect, his was a one term presidency. His popularity in office rapidly declined in large part because he opposed the creation of a central bank deposit system for the US government. Instead, he favored regional banks. However this meant that US commerce did not have a single currency, and individual banks were subject to regional market instability. A massive collapse of the system brought about The Panic of 1837 for which he was largely held to blame.

He did not own slaves, but kept paid servants who were usually Irish immigrants. He was considered to be anti-slavery, yet he continued the implementation of the mass relocation of Native Americans begun under Andrew Jackson. The resulting hardships and deaths to these First Nation people would become known as the “Trail of Tears”. This was another factor in his failure to achieve reelection.

When Van Buren was growing up there was a magnificent home located near Kinderhook, built and owned by Judge Peter Van Ness, that Van Buren admired and often visited.

It was to Judge Van Ness and this home that Aaron Burr turned to for counsel and guidance after he had killed Alexander Hamilton.

The residence and grounds, known as Lindenwald, became available while Van Buren was President. He purchased the home and 125 acres adjoining it in 1839 for $14,000 (about $375,000 equivalent today). He then expanded it at a cost of $10,000 to better accommodate members of his family and political guests. The home became the hub of activity for the Democratic Party.

The property is a National Historic site, managed by the National Park Service. We thoroughly enjoyed a tour of the mansion on June 23rd.

With few exceptions the furnishings and decorations are original to the home and were the property of Martin Van Buren.

He was a man who appreciated elegance, and was deemed a “dandy” in his time.

The carpeting is from Belgium, the hand block printed wallpaper from France, and much of the furniture imported from England.

When the Park Service sought to restore one end wall in the formal dining room they found that the manufacturer of the wall paper was still in operation. The company retrieved the original blocks, nearly 200 years old, from its archives and printed new stock that perfectly matched the originals in the home.

The dining room table could expand to accommodate up to 24 guests.

On either side of the central dining room were “sitting rooms”. Appropriate for the time, one was reserved for women and the other for men.

A main floor bedroom was reserved for guests.

Servants quarters and work areas were in the basement. These included the servants dining area, the house kitchen, and laundry.

A system of cables routed from levers in the various rooms above to bells in the servants dining area so that the help could be summoned when need arose.

Ultra-modern for the time, a pump located in the basement fed water to an upstairs storage tank and boiler so that hot running water was available in the home. Van Buren even had a flush toilet.

Van Buren had a well appointed library and office on the main floor with a small adjoining informal dining room.

The second floor was reserved for the family, featuring a central area and bedrooms.

This was Martin’s room and the bed in which he drew his last breath.

A few miles down the road and through the town of Kinderhook is the final resting place of Martin Van Buren and his wife, Hannah.

We are now continuing east and north with hopes for fair weather and safe roads in the coming days.