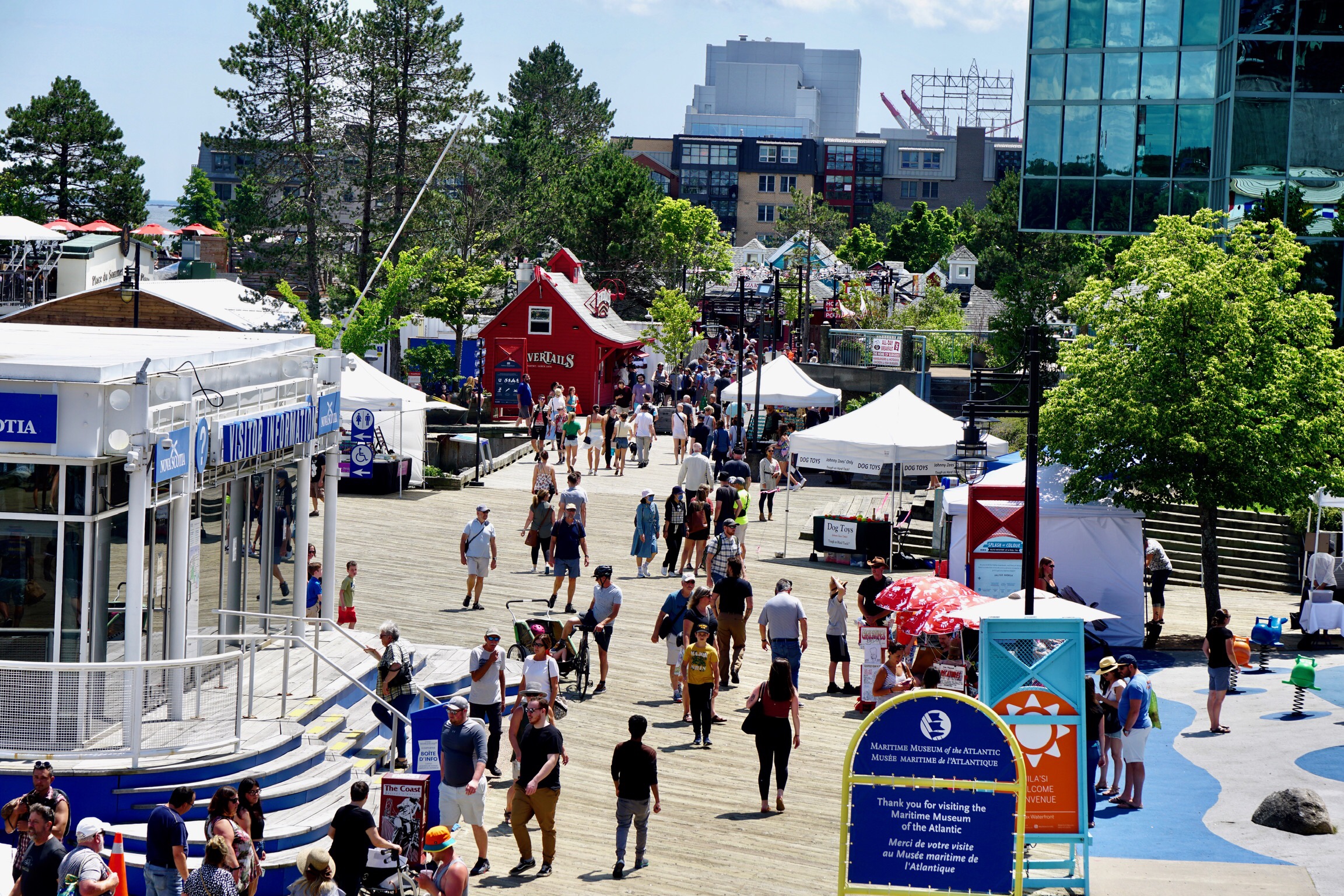 Later this morning we will break camp from the two days we have enjoyed at Porter’s Lake Provincial Park, located 30 minutes drive from Halifax. Ahead of us is a 5+ hour drive to North Sydney, Nova Scotia, where we will board an ocean ferry at 11:15 p.m. for a 7 hour sail to Port aux Basques in Canada’s Province of Newfoundland and Labrador (NL).

The highlight of this stay has been our day spent yesterday at Halifax’s charming Harbourwalk tourist district.

This boardwalk, nearly 2 miles long, fronts Halifax Harbor where there are restaurants, hotels, shops, kiosk vendors, and street performers aplenty. Fortune gifted us the perfect Saturday for the visit.

Halifax Harbor is the second largest of its kind in the world. With a population of nearly 450,000, Halifax it the largest city in Atlantic Canada. It is a center of culture, commerce, and education. Over a million souls have immigrated into Canada through Halifax. It’s Pier 21 operated from 1928 to 1971 as a major immigration processing station, comparable to Ellis Island in the United States. Today, Pier 21 is Canada’s National Museum of Immigration.

There is far too much to see in Halifax in just a day, so we limited ourselves to the Harbourwalk, and there to just a couple of the featured activities.

The one hour tour was conducted aboard a delightful vessel built by her husband. He also served as captain on the electric powered boat.

Many of the pictures in this post were taken from aboard the tiny ship that we shared with 7 others, including a couple and their two little ones from Germany. I enjoyed conversation with them in that country’s language. (Thank you Duo Lingo!)

Among the sites observed were:

The harbor lighthouse, which is the oldest in North America.

The historic Canadian research vessel, CSS Acadia, which was active from 1913 to 1969. This ship is the last one afloat in the world that actively served in both World Wars.

The Canada Naval Base at Halifax which had in port vessels that included a submarine.

And of course views of activity along the Harbourwalk itself.

Christine and I toured the World War 2 “Flower Class” Corvette, HMCS Sackville, the last of its kind in existence.

We also toured the extensive galleries of The Maritime Museum of the Atlantic. This museum had significant exhibits dedicated to the Titanic (the world’s largest collection of wood artifacts from that vessel), a remarkable collection of large scale ship models, underwater archeology, shipwrecks, and the Halifax Harbor Disaster of 1917.

A Mark V deep sea diving suit and helmet were among the displays. Manufactured from 1942 to this day, this is the classic piece of commercial and military deep sea diving equipment.

When equipped for use with special gasses, divers could descend over 1,000 feet below the surface. Among the grave risks associated with deep sea “hard hat” dives is that of an air valve failure. In order to operate at depth, air is forced down to the diving suit at pressure equal to that at the diver’s depth, often hundreds of pounds per square inch. If the air return valve fails the diver will immediately and fatally be subjected to that force upon his body. In extreme cases this has literally forced the diver’s body into the helmet, thus being “buried in his helmet”.

On December 6, 1917 two ships collided in Halifax Harbor. One was ladened with nearly 6 million pounds of high explosives which were being directed to the war effort in Europe. At 9:04 a.m. the cargo exploded, the precise moment recorded and frozen in time on the watches of the victims.

Over 1,700 people were confirmed to have died, with nearly 10,000 more injured. Tens of thousands were rendered homeless. Until the first nuclear bomb was detonated, this was the largest man made explosion ever. All buildings within a half mile radius in Halifax and Dartmouth (located across the harbor) were leveled.

The Coroner at the time, Arthur Barnstead (1873-1967) faced the monumental task of identifying, cataloging, and directing burial of the dead. He was aided by employing the systems developed by his father, John Barnstead (1845-1939) who faced the same gruesome task in 1912 with regard to the more than 1,500 victims from the sinking of the Titanic.

There are memories to the 1917 disaster throughout Halifax, the most prominent being the Town Clock on Citadel Hill.

The clock has kept time at that location since 1803. However the 1917 explosion stopped it, precisely at 9:04:35. The north clock face has remained thus fixed, while operation of the other 3 dials facing east, west, and south was restored.

As we neared the end of our day on the harbor I came upon a statue erected in honor of the Lebanese settlers who came to Canada over 130 years ago.

This was especially meaningful to me as both of my maternal grandparents immigrated to America in the early 1900’s from Beirut, Lebanon.

PS. We arrived at the ferry dock in North Sydney, Nova Scotia, too early for check-in. Parked in an abandoned gas station parking lot, we searched online for restaurant options. The only thing that came up for us was pizza and Chinese, neither of which were appealing. Soon, a car pulled up with four older adults who asked if we knew the way to “The Lobster Pound”. They explained that it was a small but well regarded seafood restaurant where reservations were required. Christine looked up the address and was able to provide directions. Thanking her profusely, the couples drove off.

After a brief discussion we decided to call the restaurant just in case a reservation was available. “Yes, but only for 5:30 p.m..”

The timing was perfect, as was Christine’s steak, the salads, ocean chowder, and my remarkable Lobster Thermidor! The Universe continues to smile upon us.