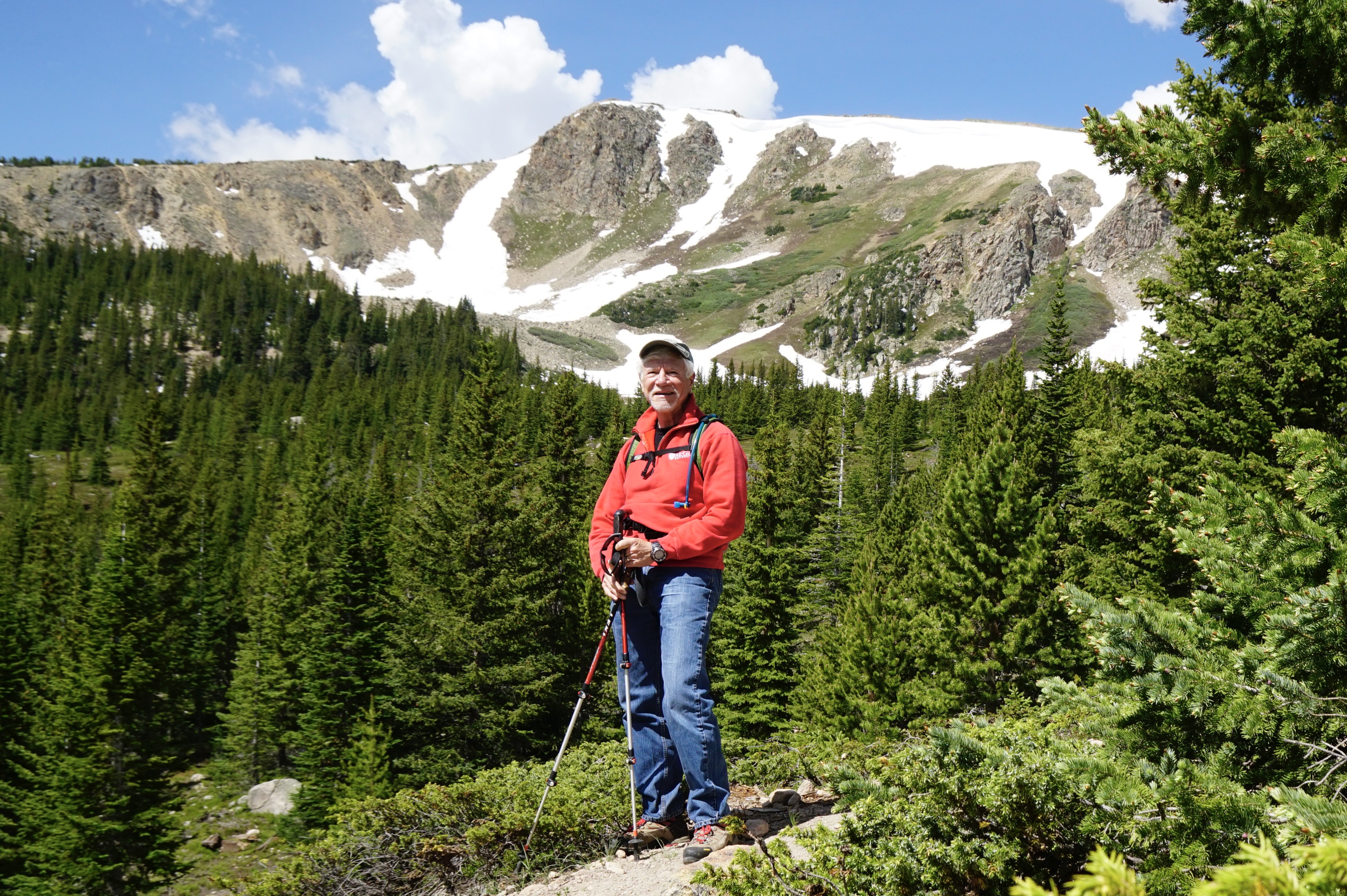 It was a good day for a hike. Breakfast eaten, dishes done, and camp made “ship shape” I drove to the Second Creek trailhead.

With my camera, Camelback (water), and trekking poles I began my ascent. 10,600 feet to about 11,600 feet. For a local this would not qualify as much of a climb. As a non-acclimated flatlander I found this to be challenging enough. Snow banks became plentiful as I reached and then continued above tree line.

The sapphire blue sky was pierced by a full sun that baked the skin and pained the eyes.

Step into a shadow and the temperature seemed to plummet. Amidst the trees, sweatshirt on… in the open, sweatshirt off.

The vistas did not disappoint and my 3 hours spent hiking provided ample opportunity for pictures and thoughtful rumination.

There are populations that make their homes above 12,000 feet, principally in the South American Andes Mountains and the Asian highlands of Tibet. However, over one-third of the world’s population lives less than 300 feet above sea-level. Far less than 1 percent live above 10,000 feet. This is the study of hypsographic demography.

As I periodically stopped to catch my breath I began to consider how quickly the air thins as elevation increases. Humans are not well designed to flourish above the clouds… there is a reason that the salinity of our blood closely matches the salinity of the oceans. We are physically happiest at the altitude of the seas from whence we emerged eons ago.

So here I am loving the mountains, the dry air, the smell of pine, the big brown bear that wandered through my campsite… yet I will never achieve the full aerobic capacity that I enjoy at 900 feet back in Kansas City.

The world is approximately 8,000 miles in diameter. Depending on the scientific discipline, the Earth’s atmosphere may be deemed to extend upwards to about 60 miles. Of course no human can survive at that altitude. Mount Everest (29,029 feet) is the highest point on Earth, not even 4 miles in elevation, and yet the fittest human can only briefly survive at that extreme.

Our inclination to be species-centric burdens us with the illusion that we are masters of vast (near endless?) realms and inexhaustible resources. However, if the Earth were reduced to the size of a 3 foot diameter ball, then the corresponding atmospheric equivalent of 10,560 feet (2 miles) above sea-level would be 9 thousandths of an inch (0.009”)! To put that into perspective, that is roughly the thickness of two pieces of ordinary copy paper.

The reality is that we are fragile creatures living within an incredibly thin envelope of breathable air. Borrowing upon an ancient proverb, “It’s an ill bird that fouls its own nest”… or perhaps more to the point, it is an ill fated humanity that chooses to break the wind that it breaths.