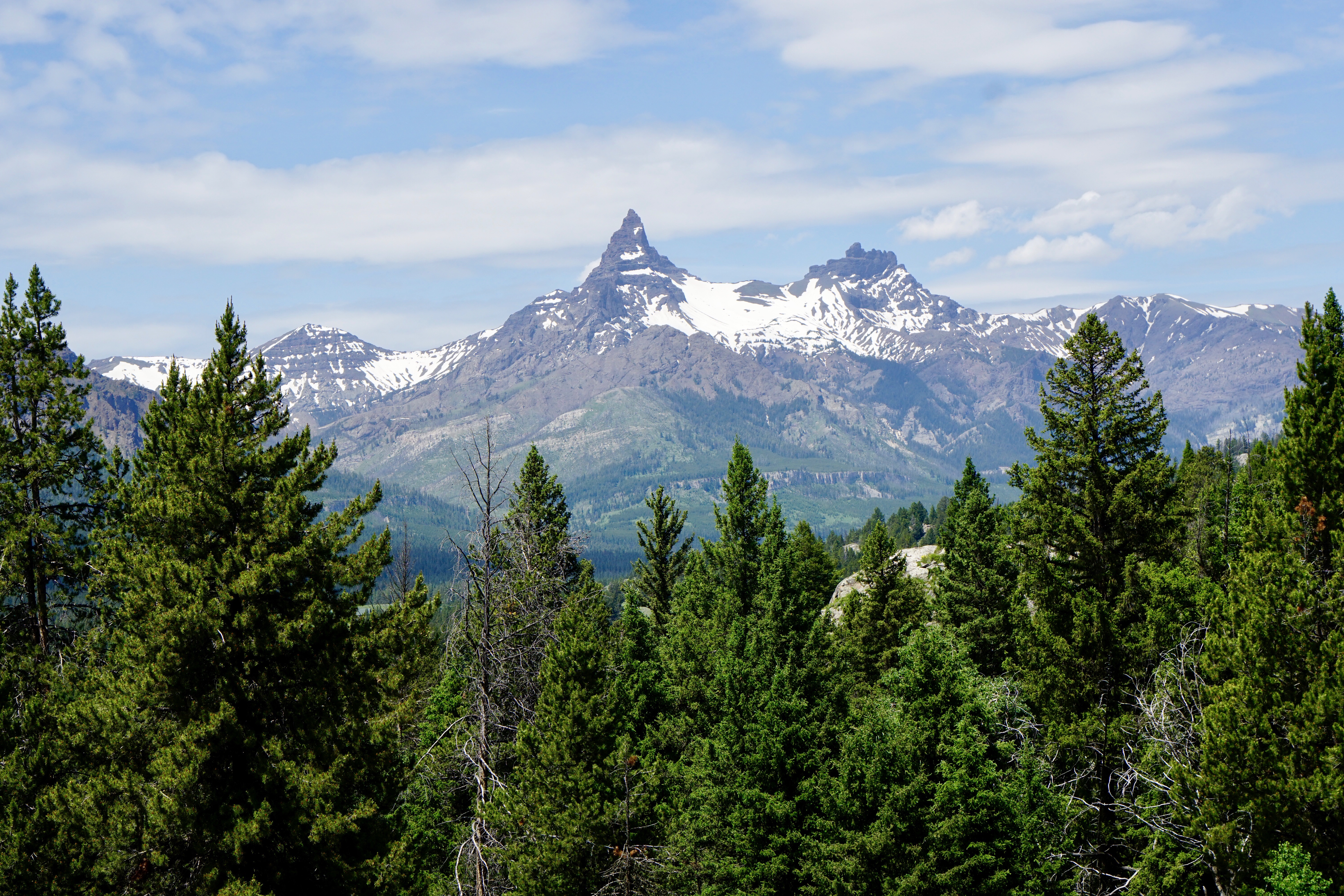 I awoke at sunrise to a 32 degree morning brushed with heavy frost. Fortunately, my trailer has an adequate heater that kept things above 50 overnight and when turned up it gave a toasty 68 degrees that made for a comfortable breakfast.

Still in my bedtime “scrubs” I wandered toward the outhouse but was stopped dead in my tracks by the explosion of light and color radiating from Beartooth Lake and 10,000 foot high Beartooth Butte in the background.

Reversing course I grabbed my camera and headed through the woods down to the shore. Glorious!! The snowcapped Butte was a beacon of light. Its mirrored reflection on the lake doubling the effect and elevating beautiful to breathtaking.

On the distant shore two elk played in the water, while the herd sunned and grazed on the slopes above.

They were only discernible to the naked eye through focused attention and were barely captured by my camera, the lens and zoom pushed to the limits.

I stood to take the scene in for nearly an hour. While my legs were idle, my mind was not.

What I am about to share is not meant to proselytize. This is merely an expression of my own beliefs which are neither superior or inferior to anyone else’s. I was raised a Catholic in a Catholic family and provided a Catholic education. While I self identify as “raised Catholic”, that provides no more insight into who I am or what I believe than does my identification as a Caucasian, second generation of immigrants. Who I am and what I believe continue to be a work in progress.

At two significant moments in my life, separated by 41 years, Catholic clergyman have admonished me to unconcern my self with dogma and “the rules” and instead listen to my conscience. They each tasked me to honestly follow the guidance of my conscience. I try and mostly succeed.

I find it impossible to listen to my conscience without also exploring some of the larger questions that have been pondered for millennia. Among those questions is whether there is a Creator, and if so does that Creator (“God By Any Name”) intervene in our daily lives.

We are (perhaps) unique in the animal kingdom as having a “free will”. We are burdened by innate physical urges to satisfy hunger, procreate, protect, survive… just as other animals, but we have the capacity to intentionally override those compulsions. Humans can starve themselves to death just to make a point. They can choose to be celibate. They can choose passive resistance. They can choose to end their own life. We can make choices in ways that no other creature can. We can make good choices and we can make really bad choices too.

If the Creator intervened to rescue us from our bad choices then our free will would be a fiction. I have made my share of mistakes (as the song goes, “Mistakes, I’ve made a few, but then again too few to mention…”) and I have usually had the good sense to discern and make other choices that resolved matters. Some folks avoid the mistakes in the first place, while others never abandon their bad choices. I don’t see an active hand of the Creator in these matters, except perhaps in the voice of conscience.

Life by its very definition is a lottery that sooner or later ends in death. In a river a salmon spawns thousands of eggs from which a few will survive a gauntlet to the sea, returning later to repeat the circle of life. My daughter gave birth to very tiny naturally occurring quads, one passed at 7 weeks and the remaining 3 thrive on their way to adolescence. In the last year we have lost good friends to accident, disease, and intention. All were good people in the truest sense of the world. I don’t believe the Creator actively chooses the fate of salmon, children, friends, or World Series victors. Nevertheless, I find that my senses are inadequate to fully explain all that occurs with me and around me.

My parents gave me an excellent start in life. I was well fed, well clothed, and well educated. They provided me with a model of parenting from which I could choose how I would later parent. Christine and I have strived to do the same for our children. My parents are not entitled to credit for my successes, or blame for my failings. They are entitled to my gratitude for the start in life that they gave to me. The same goes for the Hand that gave me breath and free will.

I am grateful for my life, for my humanity, and for this day. But the life that was breathed into me did not include a parachute to rescue me from my free will.

Nice Post Peter Michael. Who do you think has been posting the suggestions to your conscience all of these years?