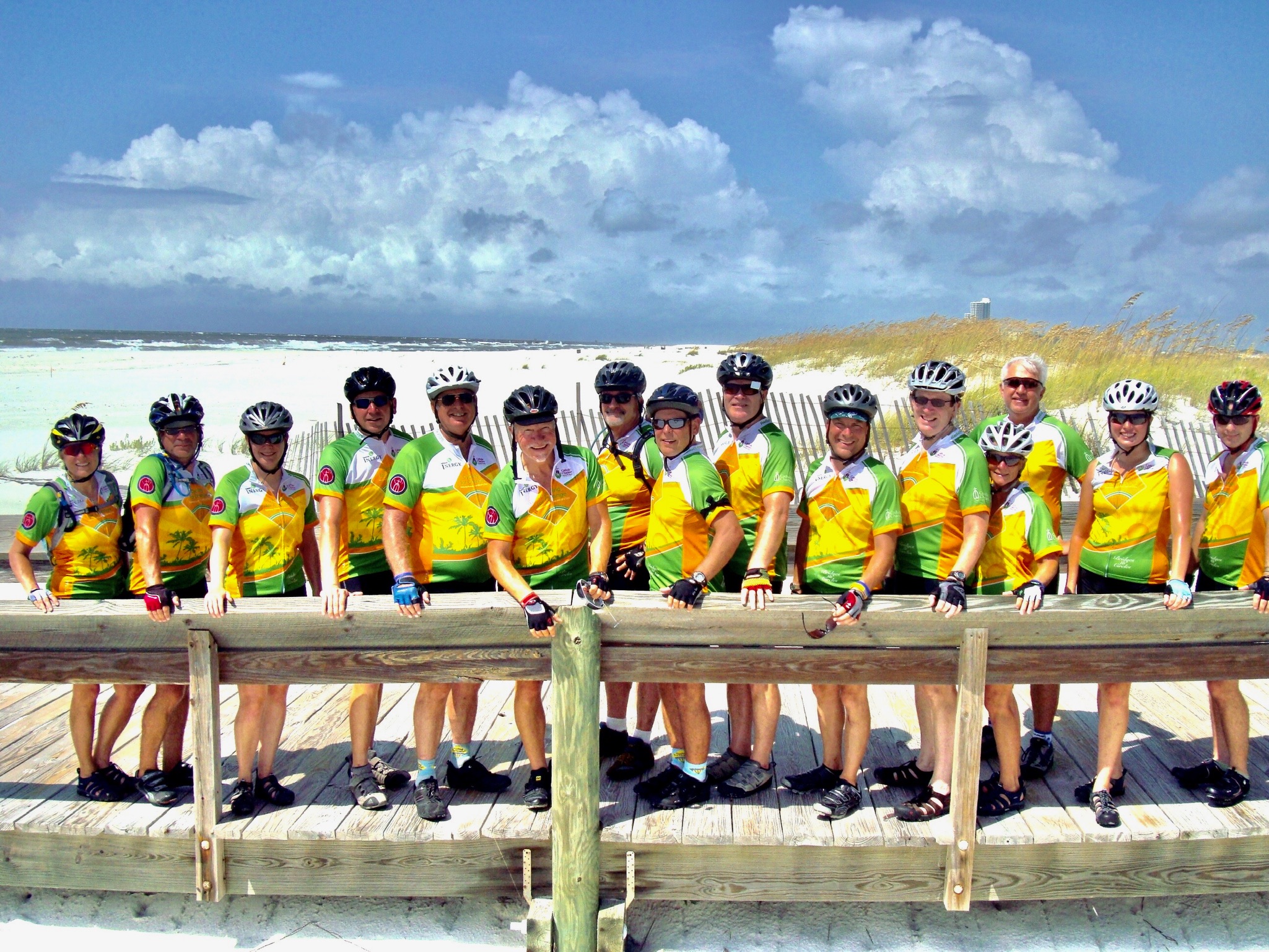 On the morning of August 15, 2010 we assembled to continue our journey east and south.

Ahead of us lay the final 1,150 miles, allocated between 18 riding days. Nearly 1,000 of those miles would be ridden in Florida. Certainly, we were not on the “home stretch”, but something had changed. We were excited, suffused with an optimism that had not been present over the last few weeks.

Perhaps it was the transformation that included palm trees and seashore vistas.

Perhaps it was the cooling offshore breezes that replaced the inland swelter that we had endured.

The roads had become pool table flat, except where the sea causeways arched to accommodate commercial shipping.

The sun shone brightly upon and within each of us.

However, all was not paradise in those coastal waters.

40 miles offshore from where we rode the largest marine oil spill in the history of the American petroleum industry was unfolding. On April 20, 2010, the Deepwater Horizon, a mobile oil rig, had been drilling an exploratory well in 5,000 feet of water. On that day the wellhead violently blew out, taking with it the lives of 11 workers whose remains were never recovered. The rupture caused the release of an estimated 210 million gallons of crude oil that continued unabated well into 2012. In Louisiana alone, nearly 5 million pounds of oil impregnated material was removed from the coastline. The direct environmental and economic damages were felt over 68,000 square miles, an area as large as the State of Oklahoma and easily visible from space.

Oil contaminated the beaches of Louisiana, Mississippi, Alabama, and extended along the coast as far as southern Florida.

As we rode we saw cleanup crews at work and witnessed the black corruption washing ashore.

What was hidden from us was the devastation to the flora and fauna. Thousands of species were impacted. The health and livelihood of millions of coastal residents were threatened, impacts that continue to be felt more than 10 years later.

Deepwater Horizon did not dampen our spirits.

Over the next 6 days we would pass through Biloxi, Mississippi, Dauphin Island, Alabama, and into the Florida panhandle: Pensacola, DeFuniak Springs, Marianna, and riding into Tallahassee we would enjoy a “rest day” on August 21st.

Between Marianna and Tallahassee we passed from Central Standard into the Eastern time zone, 4 time zones east from where we started on the Pacific Northwest coast.

It was one of a series of milestones that were reminders that the conclusion of our quest was drawing near.

On August 17th we were joined by Mark Dufva, Executive Director of Catholic Charities of Northwest Florida. Accompanied part of the way by a few co-workers, he rode with us for 4 days and over 300 miles from Mobile, Alabama to Tallahassee, Florida.

Mark was not a veteran cyclist, but what he lacked in experience he more than made up for with enthusiasm and determination.

On the 18th, a day that was scheduled to cover about 90 miles, Mark joined me for an extension that would take the day’s ride over the 100 mile mark, a significant accomplishment known among bicyclists as “riding a century”.

Mark was also largely responsible for the explosion of publicity that we enjoyed.

There was a media event and mayoral proclamation ceremony in Pensacola, hosted by the Honorable Michael C. Wiggins.

En route to DeFuniak Springs we were hosted at a BBQ lunch in Ft. Walton Beach where another proclamation was made on our behalf.

Father Matt and Mark were interviewed via telephone on Christian Talk Radio.

Mark worked to make other connections for our meals and lodging. The most notable was the “Cycling for Change – Homeward Bound Rally” held in Tallahassee.

This was a festive family event that featured food and entertainment.

We were treated to lodging in Tallahassee courtesy of the Newman Center of Florida State University and the endearing hospitality of its Director, Sister Christine Kelly, SSJ.

It is hard to imagine that after 10 years I could hold any regrets from my participation with C4C, but there is at least one. Over the years I have learned that I am fairly accomplished at beginnings, but quite deficient when it comes to conclusions. The child-like enthusiasm that I can barely restrain at the start of an “adventure” is balanced by my tendency to withdraw into myself when the finish line comes into sight.

As we lingered in Tallahassee, 86 days in the constant company of 15 extraordinary people were behind me. We had shared a once-in-a-lifetime experience. I could not shake the thought that in 2 weeks it would end and we would go our separate ways. There would be memories to last a lifetime, but it would never be the same as when together we rode across America.

I wish that I had not become so self-absorbed. I wish that I had been more gracious and grateful to those with whom I shared the experience. To paraphrase a line from a popular song, “Regrets, I’ve had a few… but then again just one to mention.”