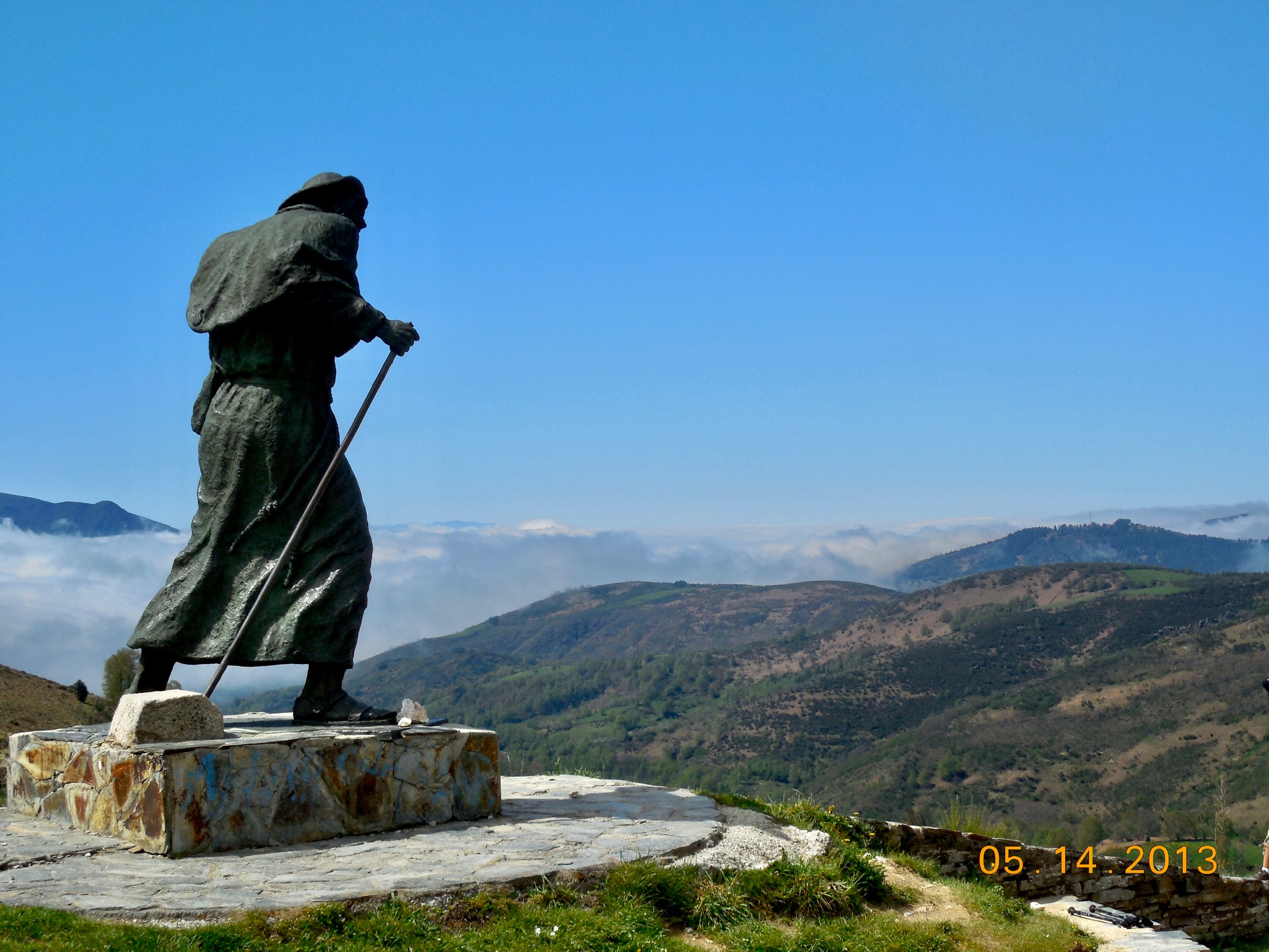 With 21km ahead of us that included 2 steep mountain climbs, one an increase of nearly 2,400 feet, we were out the door and on our way by 7 a.m.. The 14th Century Castillo de Sarracin loomed above and to our left, a shadowy outline in the early morning twilight.

The first few kilometers tracked along the rural N-VI roadway, which thankfully had very little traffic at that hour.

We continued through the tiny village of Ruitelan which was nestled in the shadow of the towering flyover bridgework of the busy A-6 expressway.

Within an hour of our departure we had reached Herrerias (pop. 600). Leaving the roadway behind us, we began our climb to O Cebreiro. The mountains that surrounded us kept us in shadows for another hour.

The ascending path was rock-strewn. Footfalls of countless pilgrims over the centuries had worn the trail as if it had been intentionally dug.

As we climbed the views extended outward and we were treated to stunning vistas, clear skies, and perfect weather.

About a kilometer before O Cebreiro we encountered a heavily graffitied stone monument marking the frontier border between the autonomous regions of Castilla y Leon and Galicia.

More than just a line on a map, this demarcation also heralds the entry into a culturally distinct region. At times, Galicia looks and feels more like Ireland than Spain. Thick stews are popular, and as one nears the coast dishes of fish, shrimp, and octopus become favorites of the inhabitants, and certain Peregrinos (me!).

A regional language, galego, is still spoken. As in other Celtic countries there is a concerted effort to preserve the ancient languages and other long-held traditions. With Santiago de Compostela as its capital, we know that we are entering the final stretch.

At an elevation of 4,300 feet, O Cebreiro is a tiny hamlet located at one of the highest points of the Camino. Its fame derives from a miracle alleged to have occurred in an ancient church situated in the village.

Dating to the 9th Century, parts of Iglesia de Santa Maria Real (Church of St. Mary) comprise one of the oldest buildings, and the oldest church associated with the Camino de Santiago. The original church was largely destroyed in the early 19th Century but rebuilt on the original foundation between 1965 and 1971. Within the church is the original baptismal font.

Many believe that on a wintery day in the 14th Century a tired priest was saying Mass in this small church. A peasant from a nearby village, having hazarded the arduous climb to the church in a raging snowstorm, entered the church at the moment of the Eucharistic Consecration of the bread and wine.  The priest took exception to the peasant’s late arrival, berated him accordingly, and further criticized him for having risked his life to merely watch a perfunctory religious ceremony.  At that moment the bread and wine were said to have miraculously transformed to the actual flesh and blood of Christ.

The Eucharistic miracle of O Cebreiro was confirmed in 1487 by Pope Innocent VIII. The chalice, particles of the transformed bread and wine were placed in a reliquary that was donated by Queen Isabella. In addition to the baptismal font, the paten and chalice associated with the miracle have been preserved. The church also contains a statue of the Virgin Mary that dates to the 12th Century.

The importance of the miracle is such that the flag and coat of arms of Galicia include the image of the chalice and Eucharist.

At O Cebreiro we found ourselves literally above the clouds.

The village is not only a  literal and figurative “high-point” on the Camino, but it attracts flocks of non-Peregrino tourists. Virtually all accommodations here were booked.

We took time to wander through the hamlet, take some refreshments, and of course some pictures.

This “Palloza”, a design which dates to pre-Roman times, is located at O Cebreiro.  The image is courtesy of the internet.

As luck would have it, when we arrived at O Cebreiro a taxi pulled up in front of us. Exiting the cab was Patricia, a pilgrim from New York. Weeks earlier at Orisson Refuge she had made a tactless public comment when Christine arranged transport to avoid the very difficult climb over the Pyrenees Mountain pass to Roncesvalles. “Real pilgrims carry their packs and walk every step of the way.” Apparently her definition of a “real pilgrim” had changed over the course of the last 700km.

Our destination for the day was 9km ahead, Alto do Poio. Although it is situated at nearly the same elevation as O Cebreiro, the path descends in the interim and then makes a wicked climb over the last 1km to the highest point on the Camino in Galicia (4,380 feet). At the top are two lodging options situated on opposite sides of a road, and little else.

After mentally flipping a coin we registered for the night at Hostal Santa Maria do Poio. It appeared a more comfortable option than the albergue across the way, plus activity outside of the albergue hinted at a full complement of customers.

Checked into our room we moved with beers in hand to outside tables bathed with warming sunlight from the still clear sky. A few minutes later we were joined by our Camino friend, Kris Ashton of Denver Colorado.

Back at O Cebreiro Kris heard that we had recently passed through. She put her walking shoes into “high gear”, hoping to catch us. By the time that she reached Alto do Poio she believed that she had lost us. Fortunately, she saw us just as we sat down across the way to enjoy our restful libations (aka beer!). She joined us for a rest and an adult beverage before continuing on another 3km to her intended destination for the night, Fonfria. We did not know it at the time, but this effectively began the final stretch of the journey into Santiago, the 3 of us sharing company, stories, and cementing a friendship that has endured now for over 8 years. One of the most valuable and enduring gifts of our 2013 Camino.