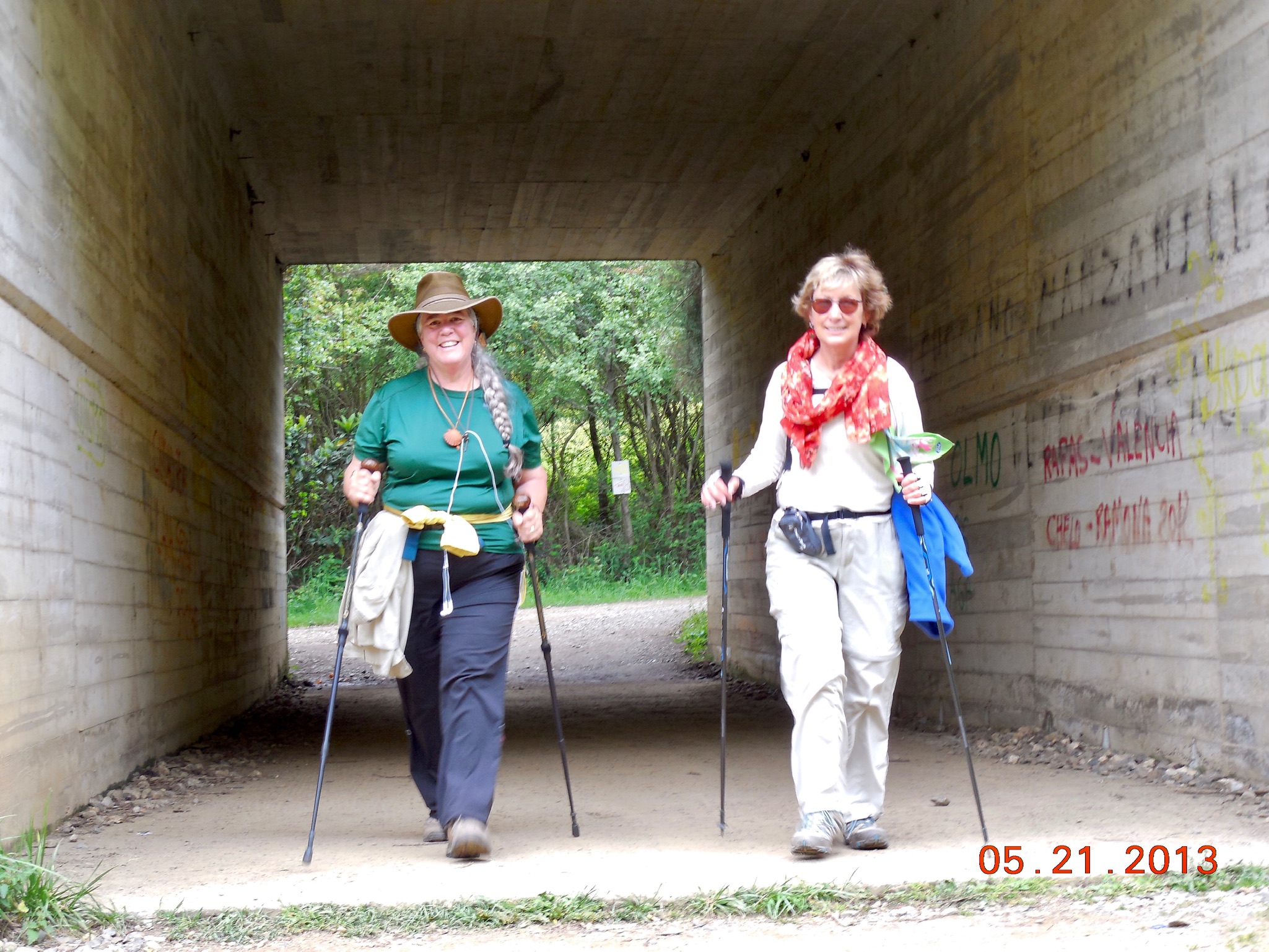 Awake, I knew in my bones that this day was different. How was that possible? On the Camino the last 39 days we had experienced every kind of weather. The trail had presented us with every condition and trial. We had endured illness and injury. Each day had offered new friendships with like-minded people from the world over. At 19km the distance was not significantly different compared to any other day. So, how could this day possibly be different.

It weighed upon my spirit much like my pack bore down on my shoulders. This day, tonight, would be the last one slept on the Camino. Tomorrow we would walk into Santiago.

The three of us said goodbye to our hosts at Pension Casa Frade and left Arzua, the last major population center before Santiago, quickly finding ourselves embraced by the early morning peace of the countryside.

Kris and Christine kept close, a mirror of their friendship while I with wandering eye looked for photo opportunities.

I also played music from my iPod through earphones. For some Peregrinos it is deemed heresy on the Camino to conceal Nature’s music with that orchestrated by man. For me, Leonard Cohen’s “Suzanne”, and especially “Hallelujah”, among others provided an emotional soundtrack to the magnificent cinema that played out before me, one step at a time.

Country land, forest path, verdant canopied woods, It was a day that hinted at the reward to come tomorrow, a metaphor for the Paradise that many believe awaits us at the end of a life’s journey well lived.

As if to reinforce my thoughts I smiled as I came upon another allegorical example of the “now”, and the “hereafter”. The J. F. Abel Construction Company proudly presented “before and after” examples of structures that it had “resurrected” from one life into another. How lovely it would be to retire to Spain and settle into one of those enchanting homes with ancient roots.

The path provided other reminders of past travels and the venerated long forgotten.

There were also those who sought Santiago, only to have their journey rerouted to a more final destination.

At age 69, Guillermo Watt, a pilgrim on the Camino, died of a heart attack on this spot on August 25, 1993. Guillermo, variously identified as an Englishman or of Swiss origin, was only a day, 25km, from his destination. His monument reads, “He embraced God at the age of 69, a day from Santiago on August 25, 1993, now alive in Christ.”

Since Sarria the number of pilgrims walking the Camino had grown exponentially. We now frequently encountered organized groups who walked together, largely keeping to themselves.

Between 2013 and 2020 Kris Ashton shepherded 7 different groups on the Camino. Each of these were made up of members of a Colorado hiking club. Kris has also had the experience of walking a number of “solo” Caminos. In discussing the difference between these experiences she explained that in spite of her efforts to encourage the groups to spread out and embrace the multi-cultural friendships that the Camino offers, group members tended to remain consolidated. It would be easy to conclude that the members miss something important in not “mixing” outside the group. However, it occurs to me that a shared experience among friends who will remain in close contact for years to come also has special value.

Nearing our destination for the day we again had to hazard a crossing of the increasingly busy N-547.

Arca (parish) O Pino (municipality) Pedrouzo (administrative district), “Arca” for short, presented an unusual church that was worth a visit.

Igrexa de Santa Eulalia (Church of St. Eulalia) was “new” by Camino standards. The original 17th Century edifice was destroyed by fire in the 19th Century. Rebuilt, the church, also known as “La Iglesia de la Concha” (Church of the Shell), has a simple exterior, but features an unusual apse formed in the shape of a scallop shell, a symbol of the Camino.

There was also a noteworthy statue of a saint in the garb of a medieval pilgrim.

Often mistaken for St. James (Santiago), this was San Roque (born 1295 or 1348,  died 1327 or 1376). San Roque is the patron saint of dogs, invalids, falsely accused people, and plague victims, among other things. His fame and journey to sainthood began at birth when his “barren” mother, praying to the Virgin Mary, was graced with the child. Roque was born with the birthmark of a cross on his chest. He was reputed to be a holy and devout child into adulthood. Coming of age, he abandoned his worldly possessions and pursued a life of austere simplicity, ministering to the poor and those afflicted with the Plague. During the ravages of the “Black Death” he himself fell ill and retreated into the woods to die. He survived thanks to the help of a dog that brought him bread, water, and healed Roque’s wounds by licking them. Thus, statues of him are distinct for the presence of a dog with a loaf in its mouth, the lifted skirt with the Saint gesturing to a wound on his leg, and the garb of a pilgrim.

As a patron saint of plague victims, veneration of San Roque has found renewed popularity in the era of COVID-19.

We bid goodbye to Kris before reaching our accommodations for the night. Kris wished to experience the meditative solace of a night alone and the solitary walk into Santiago the next day. We understood how our experience as a couple might become a distraction for her. With hugs held long we parted, no assurance that our paths would again cross.

Christine and I lodged at the very comfortable Pension Maribel. However, the delight of the evening was served at the nearby Café-Bar O Pedrouzo. Not a place for vegetarians, this restaurant was a tour de force for any meat lover. We were served one of the finest beef dinners that we have ever experienced.

It was a fitting celebration of our last night on the Camino. Tomorrow, Santiago.